Maryland's first and only 9/11 rolling memorial is in remembrance and honor of the 69 Marylanders killed on Tuesday September 11th 2001 and the 162 others who have made the supreme sacrifice in the war on terror since that horrific day.  The memorial will not only be used for our 9/11 events but also showcased in local and state parades and taken to schools, scout meetings, and community events to be used as a teaching tool. We will share information on the 220 and the funds, foundations and events that have been created in their memory. These families have lost one life but are helping and supporting 100's if not 1000's of other lives because of their loss. 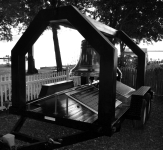 THANK YOU and continue to keep the promise to NEVER FORGET!!!