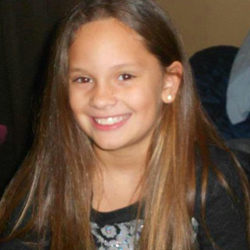 Aaliyah Boyer, 10, loved neon colors, sequins, sparkles, and animal prints. She liked to make wallets from brightly-colored duct tape and give them to her relatives. Her Aug. 27th birthday celebrations were usually built around a pop culture reference like “Hannah Montana” or “High School Musical,” but last summer she chose a “colors” theme of blue and lime green.

Aaliyah, who most recently lived in Manheim, Pa., sang lyrics from Justin Bieber and Taylor Swift–whom she hoped to see in concert later this year–to the tunes of her karaoke machine. A member of Manheim Brethren in Christ Church, Aaliyah often turned Bible verses into songs. At vacation Bible school, she never hesitated to help younger kids with crafts or games. She enjoyed sports and playing the violin. “Some people are easy to love and some people you have to choose to love. She was an easy-to-love person,” Cheri Blackburn, Aaliyah’s grandmother, told MSNBC.com. The fourth-grader at H.C. Burgard Elementary School in Manheim thought she might want to be a lawyer–to help others.

She succeeded at that goal. Crystal Blackburn, Aaliyah’s mother, told MSNBC.com that when the girl’s grandmother renewed her driver’s license last year, Aaliyah was curious about the small heart on the card. It meant that her grandmother agreed to be an organ donor, she was told. “I think everybody should do that,” Aaliyah said. Blackburn honored her daughter’s wishes, improving the lives of at least one adult and four children, including a 3-year-old girl who needed a new heart, family said. This spring, the Hope & Peace Foundation in Baltimore, Md., will name Aaliyah the first recipient of the 2013 Humanitarian of the Year award posthumously. “She would do anything for anybody,” her mother said.

Aaliyah died Jan. 3 from a wound suffered shortly after midnight on New Year’s Eve 2012. She was watching fireworks from her grandparents’ yard in Elkton, Md., when a stray bullet struck her.

Please help to pervent tragic deaths like Aaliyah's by NEVER firing a gun into the air. What goes up must come down and we would hate to see another innocent child die because of senseless act and way of celebration.